Hearing her talk about her past work and how it came to be gave everyone in the audience a primer and demystification of the very controversial Performance Art. It was revealed to be an artform that requires the highest degree of discipline (un)jokingly stating that sex/sexual acts are prohibited prior to an exhibition as it would be very draining on the body and that, as the artist’s tool, comes first… and with plenty of preparation at that. 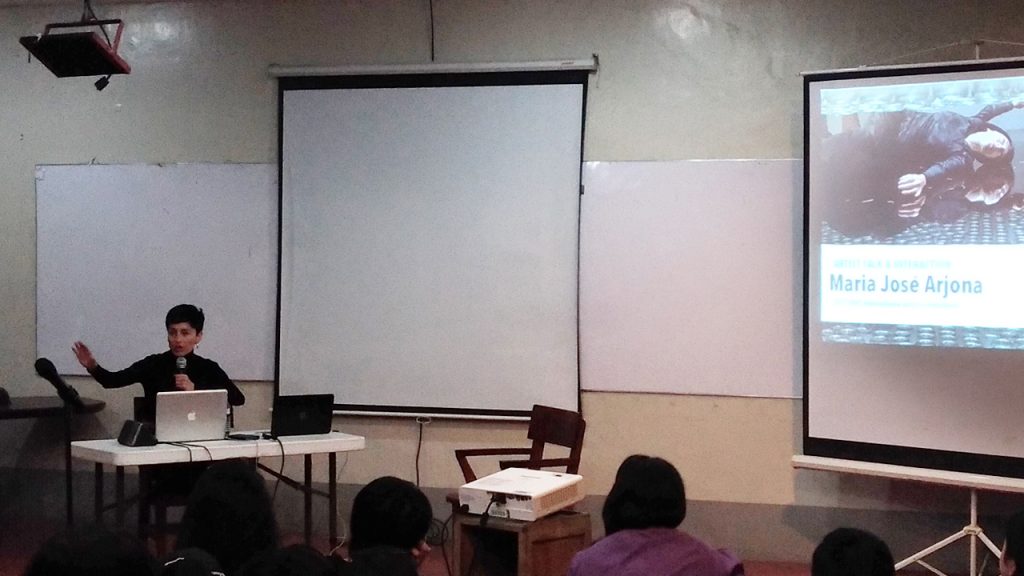 Her exposition on one of her earlier works – The White Series, which involved a pristine white room that gradually gets painted red which returns to white again after her process, let us know about an important concept that should always be a part of an artistic performance: a form of release. Her method advises that a performance art should not only achieve its intention but also let the audience free from the converted state that they came into. This is just like the discussion on protest art that we had prior wherein an altered state of mind that the participant goes through should not be kept altered before they’re returned to the “normal” environment. Playing with the psychology in this manner, without release, is bad form in performance art.

It was during these first few slides that a technical glitch had occurred and Maria handled that perfectly well. Truth be told I was actually thinking in my head: there might be a performance in it waiting to happen. She went on to describe another series she did in Naples touching up on three seemingly unrelated ideas very differently;

On Power saw her with a taxidermy wolf in tow, first on a cart and then on her shoulders, which elevated to one where she is the one on the leash and she hands power over to a complete stranger. It was a very deep piece talking about the government and society all the way up to the individual all within a rigid mechanic between the wielder and the recipient/oppressed.

On Luck with its set of rules had individuals gambling against her using dice providing luck based opportunity to do to the other whatever he/she pleases without limitation leave for using only the body as a tool. On this, affection was revealed to be the demand with the most prominence. It begs the question then of courage and willingness and the way it is within your control on one hand and within anothers just as fast. This was, I believe, her re-presentation of one of Marina Abramovic’s performance pieces

On Force saw Maria keeping a diamond on her tongue, one that she would relinquish should someone, anyone, be able to get a hold of it. The documentation shows her being half wrestled by way of some people trying to pry her jaws open, an almost impossible feat where physicality is concerned. It had eventually yielded to a strategist who came up to her displaying no force openly and taking it with his own tongue while it was exposed.

Maria then went on to describe a few more works, these ones more on life and its affirmation of itself: She showed us a piece where we saw her strapped into a medieval healing contraption involving studs and leather bindings which, when you first see it, looks more like one to be used for bondage. Here was a reiteration of the shock and release stratagem in play culminating in a collective sigh of everyone in the room upon her final emergence from the device.

Another one called “Nesting” involved Maria crafting a net-like “nest” coming back into her home country as a migratory bird would; This was in conjunction with her “Flight Plan” where a table had various ephemera on it documenting the route she traveled and the people she had met while on this journey. “Segunda Mensajero” had a vulture, an actual bird, carrying messages sent over from “someplace else” thence interpreted once done, it had been recreated within a sacred space where Maria played the part of the bird and smoke signals in this alternate rendition. Here she expressed the importance of not repeating a performance as it is a pitfall onto categorization, something fatal for the artform in general.

Pressed for time she went ahead to her most recent work “Lifeline” that was conceptualized in Galapagos, which involves thousands of bottles suspended over a “basking” Maria generating the sound of the ocean continuously. The concept behind this piece involved horizontality and how this is actually the space where animals thrive in, not the vertical notions of power towering over all. It was a mesmerizing display starting subtly, gaining momentum, breaking out, and returning to calm communicating sound more than sight and is truly heart rending at that.

What followed was the open forum which was equally revelatory as the queries came in. The discipline of the artist, trials, and conquests, practically outlining even the diet that she undertook to do some of her performances really opened that world up to us. She had also stressed the importance of research and development here because some of her works would not have been possible had she not gone ahead and consulted with other practitioners of the sciences as well. She also had a statement about how artists are very intelligent people and that an artist should be able to communicate this by writing about it, seeing as this is the first thing that curators and other evaluators will be looking at apart from the actual portfolio, it lets them know how a particular artist thinks and of his/her disposition; this was related to choosing a gallery that will eventually support the artists work, as not all galleries house particular art typologies… most especially that of performance art.

It was a very pleasant afternoon and time literally flew during the talk. She was very articulate and was able to express her ideas very well to the audience and I was fortunate enough and very thankful to be in the auditorium when it happened.